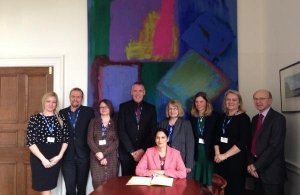 The Memorandum of Understanding (MoU) is a voluntary agreement between Payroll Giving Agencies (PGAs) and charities. The MoU sets out for the first time a shared way of working for Payroll Giving as well as agreed data reporting templates.

APGO members Charitable Giving, Charities Trust and Charities Aid Foundation – the largest PGAs in the UK all attended the signing at HM Treasury in March. Also present to sign the agreement was Priti Patel MP, Exchequer Secretary to the Treasury, Peter Lewis, Chief Executive of the IoF and Mervi Slade, chair of the IoF’s Payroll Giving Special Interest Group.

The MoU was called for in submissions to a Government consultation on Payroll Giving in 2013. Government committed to facilitating the introduction of the MoU in its response to the Consultation recommendations.

The memorandum includes an agreement to work towards a “standardised disbursement report” for PGAs to provide to charities. This means that the forms agencies use to communicate information about donors to charities will conform to an agreed template.

It also includes a commitment to help charities discover the most successful ways of recruiting donors who are willing to give through their payroll. The Treasury said this would be accomplished by requiring agencies to submit their donation figures to an online database so that they could be collated and presented in a report.

“Charities provide an invaluable contribution to our society and receive strong support from the government including tax relief on donations. Payroll Giving is one of the most effective ways for donors to give money to good causes on a tax-free basis, and more than a million donors use the scheme each year.

“This government has consistently supported ways that make it easier for people to give and this agreement will help charities and agencies get the most out of the Payroll Giving scheme to help more money go to good causes.”

“The IoF Payroll Giving Special Interest Group (SIG) welcomes the MoU as the long-awaited first formal agreement between charities and Payroll Giving Agencies. A standardised approach to payroll disbursement statements will reduce administration, with the potential to provide charities with more information about their supporters. In turn, this will allow charities to communicate more meaningfully and effectively with their supporters.

“We also really look forward to seeing the bigger picture that will emerge from the more in-depth sector-wide annual reporting from the PGAs. The Payroll Giving SIG and others pushed for this in order to bring greater credibility and transparency to Payroll Giving in the UK.”