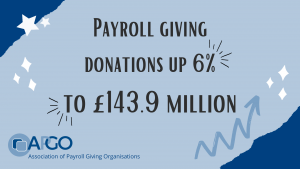 Indicator figures released during the first national ‘lockdown’ quarter (Financial Q1 2020- 2021) showed an uplift, and the full year’s numbers now show this trend did not slow. From April 2020 – March 2021 donations made through Payroll Giving topped £135.5 million, with match funding from employers bringing the total to £143.9 million.

The figures collated by the Association of Payroll Giving Organisations (APGO), which represents the key stakeholders in the Payroll Giving sector, show employee donations are up 6% and employer matching rose by 4% compared to the previous financial year.

A surge in the average gift was also recorded in the final quarter (January – March 2021), potentially attributed to more one-off donations being made in this tax efficient way, to coincide with the ending fiscal calendar.

“When other forms of fundraising are under pressure, it’s great companies and their employees are utilising Payroll Giving to aid those in greatest need. With UK charities facing an estimated £12.4 billion funding gap due to missed events and paused fundraising, Payroll Giving has provided a reliable income for many causes. It has proven a fantastic and easy way for employers to engage with staff on a personal level during such turbulent times.”